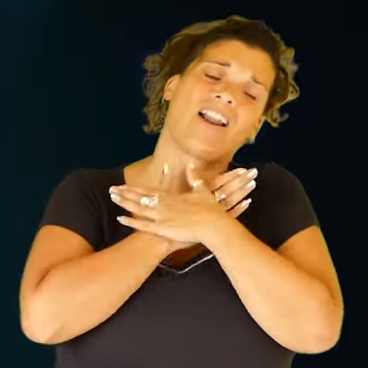 One song and three ways to sing it – visually!

This amazing video shows how language can be made visual in three different ways, for deaf people to enjoy a beautiful song: A Thousand Years by Christina Perri.

When you watch this video, you might be forgiven for thinking the three performers are all using signs and gestures, hand-shapes and movements in the same way. That is unless you are able to spot the difference. What we are in fact seeing are two languages conveyed in three different ways.  BSL (British Sign Language) and the English language represented by SSE (Sign Supported English) and Cued English (with Cued Speech). Three different ways that deaf people in the UK access language – visually!

Sign Language is a visual means of communicating using gestures, facial expression, and body language. Sign Language is used mainly by people who are Deaf and in Britain the most common form of Sign Language is called British Sign Language (BSL); a full-fledged natural language, which was recognised by the UK government in 2003.

Many hearing people are under the false impression that Sign Language is a worldwide universal language, but this, however, is far from the truth. BSL is distinct from other signed languages used around the world and because of its isolated nature, there is even significant variation within BSL from city to city in Britain. This is known as regional variation and can be thought of as being similar to regional accents and colloquialisms found in spoken languages.

Many people are also mistaken in thinking that BSL is a way to convey the English language. However, BSL is not dependant on nor is it strongly related to spoken English, it is a silent, spatial language with its own grammar and lexicon and has no written form. Like any full and natural language, BSL takes many years of practice to master and achieve fluency. BSL is the preferred language of over 87,000 Deaf people in the UK, for whom English may be a second or even a third language. If we include all the people who can use BSL, there are a total of 151,000 individual users in the UK. This figure increases still further if professional BSL users are taken into account, such as interpreters and translators.

Representing spoken (or in this case, sung) English language in this film are two invented ‘visual modalities’ or codes; Sign Supported English and our own Cued Speech.

Another form of signing used in Britain is known as Sign Supported English (SSE). SSE is not a language. It uses many of the same signs as BSL but these are now added (where possible) to the spoken words and follows English word order. It is used by people like Megan to clarify what she is saying in English.

As the name suggests, Sign Supported English only ‘supports’ English, it does not completely represent the subtlety and complexity of the full English language, as there are so many words that do not have equivalent signs. SSE does not give access to the phonology of English, which is so vital for becoming literate but it is commonly used in Deaf education.

English speakers who are still in the early stages of learning BSL often revert to using their signs in English word order while mistakenly believing they are using BSL. In fact, they are producing SSE.

To the untrained eye, Cued Speech can look similar to both BSL and SSE. Although, in fact, Cued Speech is doing something very different. It is used to help deaf people see what we’re saying, it is a lip-reading tool.

The hand-shapes that Cate is using in the video, are not ‘signs’, as in BSL. They are actually more like ‘sounds’ and they are there to show deaf people what they can’t see by lipreading alone. It’s only possible to lipread about 1/3 of the sounds that we make when we’re talking, adding the cues gives deaf people a way to see every sound, the handshapes show consonant sounds and the position and movement of the hand reveals the vowels sounds.

Cued Speech is used to help deaf people see spoken languages from all around the world and it can be used bilingually alongside a signed language, just like in this video.

Why not give a donation to Cued Speech UK by using our Support Us website page.

If you have a deaf child or want to learn more about Cued Speech, you can contact Cued Speech UK by using our contact page, you can also send an email to [email protected] or you can call us on 01803 712553.

Cued Speech UK would love to see what you have to say!