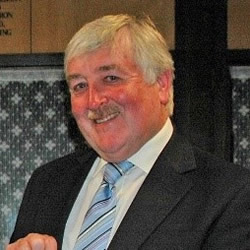 Ken is the grandfather of a deaf child brought up with Cued Speech. Ken’s early career was with the Merchant Navy, before moving into a sales career in the food industry. He later moved into the shop-fitting business with his own company, fitting out shops and organising exhibitions throughout the UK. For the past 26 years Ken has run a painting and decorating business.

Ken became aware of the Cued Speech Association after his granddaughter was born deaf. She lives in France with her parents and brother, who all attended a Cued Speech course in Exeter. His granddaughter, now 11, not only speaks fluent French and English but uses Cued Speech and signing in both languages. The whole family has benefited enormously by learning to cue.

Ken attended a Foundation course in Exeter three years ago and loves communicating with his granddaughter. He also enjoys speaking about and promoting the Cued Speech Association from a grandfather’s point of view and therefore accepted an offer to become a Trustee. He has served on several committees including the Scout Movement and Choral Societies. He helps with our fundraising by constantly getting others to part with their old mobile phones! Ken also hopes to arrange a charity concert soon, raising some much needed funds for the charity.