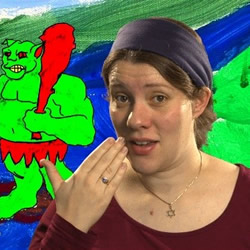 Emma says “Cued Speech gives parents back their child and their language. it enables deaf children to take part fully and equally in family life, and gives them independent access to a whole world of knowledge and communication through literacy. For a child growing up with Cued Speech, the sky is the limit.” Emmabegan using Cued Speech to aid children of varied ages in her former job in Education. Over time, she has become a highly proficient linguist, with five languages under her belt. She is fluent is BSL, and can cue in three different languages: British English, German and French. She can also cue in American English – an important feat when dealing with dialect nuances between the varying forms of English. She has provided valuable service at Cued Speech Summer Camp, offering 1:1 BSL-medium tuition to young participants.

After giving birth to her son, Daniel, aged four, she gave up her job in the world of education, and is now a popular and well-trained Cued Speech tutor via Skype.

She resides with her husband, Soroush, and Daniel, and enjoys her time spent with her family when not contributing her time and expertise to the Cued Speech Association UK. Next on her list of languages to master, Emma is currently learning to cue in Hewbrew, an important personal choice to celebrate her religious beliefs.