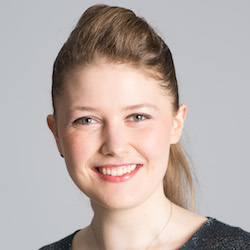 Helen became totally deaf in both ears as a toddler, as the result of damage caused by meningitis. At the age of three, she received a unilateral cochlear implant. Despite the profound challenges of accessing education as a deaf student, Helen persevered and many years later graduated from Oxford University (St. John’s College) with a First Class Honours degree in Physiology and Psychology and an MSc in Neuroscience. Helen then began postgraduate research at University College London, sponsored by Action on Hearing Loss and Cochlear UK. She gained her PhD in Speech, Hearing and Phonetic Sciences in 2018.

As a deaf person, Helen has first hand experience of the extremely challenging listening conditions that deaf people endure and how much listening effort (LE) is needed to cope and achieve successful auditory perception during everyday life. Her interest in auditory neuroscience grew from these experiences. During her time at Oxford University, Helen was able to explore the altered physiology involved in the deaf brain, particularly when interacting with hearing technology (such as cochlear implants). These insights led her to conclude that sustained exposure to excessive LE not only causes cognitive overload and over-tiredness but also, alarmingly, has the potential for other negative consequences such as physical and mental health problems. This is because cognitive overload can trigger a chronic stress response in the body.

This motivated Helen to undertake postgraduate research, in an attempt to find a framework for a behavioural measure of LE which might eventually become a clinical test. She felt that there should be some means to assess LE, so that its occurrence and effects could be more closely monitored in deaf people. Her research focussed on cochlear implant (CI) users, because it is recognised that the implant can only provide a sensation of hearing, and that the auditory information delivered is impoverished compared to that provided through normal hearing. This increases the likelihood of CI users experiencing high levels of LE.

Helen’s research findings, using an early prototype of a behavioural LE test, suggested that LE was already high for CI users even in the best possible listening conditions (i.e. with no background noise at all). This appeared to be a direct result of trying to process the degraded sound, because Helen found similar results in normal hearing participants listening to simulations of the same CI input.

These findings have motivated Helen to begin to liaise with a wide range of organisations, which support deaf children and adults, in an attempt to raise awareness of the impact of LE. She is particularly concerned that parents and teachers of deaf children should appreciate the need for continuing support in educational settings. This is because, although bilaterally implanted children often achieve outstanding performance in spoken language (and appear to understand speech remarkably well in noisy conditions), they are still vulnerable to the effects of excessive LE. This vulnerability is because of the additional processing burden imposed by the impoverished sound they hear.

For this reason, Helen is supportive of any intervention that reduces the cognitive load of understanding speech. In particular, she advocates the use of “multimodal” cues. Neuroscience research has repeatedly shown that processing speech is “multimodal”, where information from other senses (such as vision) has an important role for understanding speech. Indeed, although Helen herself is principally “ora/aural” and can understand speech without any other input, she has personal experience of how much her own LE reduces when lip reading and sign supported English (SSE) are added. As a result, she is extremely interested in Cued Speech, because she can see its potential in reducing LE.

Cued Speech UK has been able to draw upon Helen’s research and expertise to support people’s understanding of the underlying rationale for using Cued Speech, in terms of both neuroscience and cognitive psychology. This theoretical underpinning has helped to provide some academic justification for the use of Cued Speech with babies and children, in their early years and throughout their education.