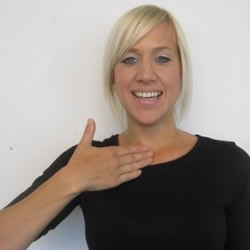 Carly is our freelance tutor from Newcastle. She first learned CS in 1990 at aged seven, passing her level one adult proficiency certificate later that year as the youngest girl in the country to pass with the highest level of excellence. Her desire to communicate with deaf children in her primary class prompted her love of CS, and she has worked hard to achieve the highest standard of work over the past 15 years. In 2012 Carly qualified as a level 2 Cued Speech instructor and now works closely alongside the Cued Speech Association UK to deliver training to families and professionals. She is the Director of AccessCS and is currently writing a series of books for children to use as a resource for the CS system.

As a Media Production Student at the University of Sunderland between 2010 and 2011, she gained great experience in visual arts, and thus attended the 2009 Cued Speech summer camp, where she produced an informative video on CS, titled ‘Spread the Word’ – which can be viewed here. She runs a toddler group in the Northwest of England called ‘Me to you – Let’s Cue!’ aimed at18month to 3 years old children. The group allows parents and children to see cueing in action, offers messy play and provides two words a week that parents can cue with their children. It is fun, interactive and aims to raise awareness about CS and where information can be found.